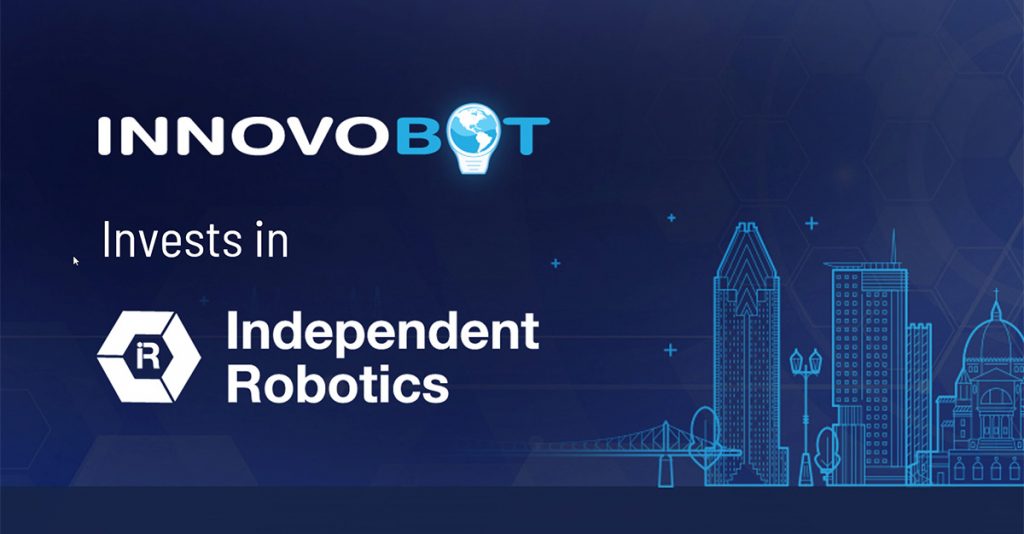 Montreal, August 5, 2020 — Innovobot has made an investment into Montreal-based Independent Robotics.

Independent Robotics creates systems for autonomous machines to do what humans cannot. An outgrowth of McGill University’s Centre for Intelligent Machines, the company’s solutions are built on a foundation of AI capabilities, machine learning, neural networks, and vision processing.

“We have a longstanding relationship with IR, having assisted in the development of the company’s business plan and technology roadmap,” says Innovobot CEO, Mario Venditti. “This is the culmination of that work and I look forward to the next phase of this exciting partnership as we work together to help accelerate IR’s growth.”

“The exceptionally talented team at Independent Robotics has developed a foundation for world-class autonomous robotics technology,” says Danny Grant, Innovobot’s Chief Technology Officer. “IR brings together advancements in multiple technical fields, including robotics, sensors, and AI, which can be leveraged in a variety of different industries.”

“We can all see that robotics is becoming a pivotal industry,” he says. “And it is exciting to think about how IR’s joining forces with Innovobot will create another significant robotics player on the Canadian scene.”

Innovobot
Innovobot is a Montreal-based venture capital firm that is growing a global innovation ecosystem to generate value and well-being for entrepreneurs, investors, and society. The firm’s Fund invests in transformational technologies that have progressed to the point where they can be brought together to generate new business solutions that solve complex, real-world issues. innovobot.com

Independent Robotics
Independent Robotics creates systems for autonomous machines to do what humans cannot. The company’s solutions are built on a foundation of AI capabilities, machine learning, neural networks, vision processing and is tapped into a broad community of researchers pushing the boundaries of robotics research. independentrobotics.com

We can help turn your great idea into great business. Take the next step toward market leadership by contacting us today.